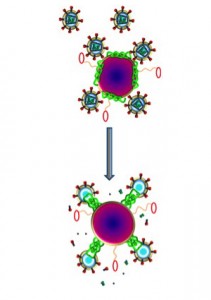 Researchers from Washington University School of Medicine in St. Louis have shown that nanoparticles infused with a toxic bee venom can kill HIV. The researchers hope to take this new compound and develop a vaginal gel that can prevent the further spread of the disease.

The key to this discovery, which was made by Samuel A. Wickline and his team at Washington University, involves cytolyic melittin peptides. Melittin is found in bee venom, and it has the fortuitous trait of being able to degrade the protective envelope that surrounds HIV.

For the experiment, Wickline’s team prepared free melittin and melittin-loaded nanoparticles and set them against various strains of HIV (CXCR4 and CCR5 in particular). The researchers then showed that melittin, when delivered in these large and free accumulations, can make life miserable for the disease.

Moreover, these melittin-loaded nanoparticles left the surrounding cells unharmed, which bodes well for the development of a topical vaginal virucide. But this didn’t happen by accident. The nanoparticles were endowed with a kind of filter that prevents healthy cells from coming into contact with the toxin. HIV, on the other hand, is small and it sifts through these filters, thus exposing it to the toxin.

Unlike other approaches, which work to prevent HIV from replicating, Wickline’s technique involves the degradation of the virus’s structure.

“We are attacking an inherent physical property of HIV,” said Joshua L. Hood through a university statement, and a co-author of the study. “Theoretically, there isn’t any way for the virus to adapt to that. The virus has to have a protective coat, a double-layered membrane that covers the virus.”

Interestingly, the concept behind the melittin nanoparticle approach could conceivably work against other diseases, including hepatitis B and C.

Eventually, the topical gel could be combined with a spermicidal contraceptive and act as a kind of two-in-one double-whammy. But for now, the researchers say that the nanoparticles are safe for sperm, and will initially be intended for couples who are trying to conceive.

And as for the study itself, it’s the first proof-of-concept that the therapeutic and safe application of a nanoparticle-mediated compound can combat HIV-1.