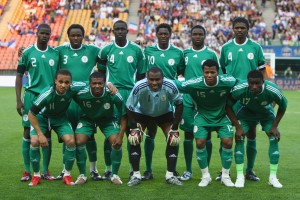 The Harambee stars of Kenya proved their worth today at the U.J Esuene stadium, Calabar as Nigeria had to fight till the last minutes before getting a draw.

The Super Eagles of Nigeria dominated the match, but the eagles were shy in front of goal as many chances were lost. One of the players who was missed due to his daunting runs down the right flank was Efe Ambrose who was on suspension.

At the 35th minute, Francis Nyambura broke the deadlock with a fabulous free-kick. The Kenyans held on and went into the break leading the African Champions by one goal.

Coach Stephen felt a need for a change upfront and returning Super Eagles striker Obafemi Martins who was sacrificed at the 60th minute for Ahmed Musa. The hardwork continued, but the Super Eagles still couldn’t find the back of the net.

Odumadi was introduced at the 75th minute for Sunday Mba who didn’t really have a good game. Kenya also brought in Jumba for Wainana.

The scores remained 1-0 with Kenya leading, and Walter coming in for Kenya to replace Oliech while John Ogu replaced Victor Moses who had been a thorn in the flesh of the Kenyans from the blast of the whistle.

There was a lot said about officiating from the beginning of the match; it got worse when coach of the Kenyan side Adel Amrouche was sent off for reasons not clear, leaving much more to be said about African referees’ officiating.

Nnamdi Odumadi who came in for Sunday Mba, an AFCON hero for Nigeria was another hero, as he equalised for Nigeria at the 90th minute with five minutes added on.

Speaking after the match, Super Eagles defender, Kenneth Omeruo said; “We lost a lot of chances. I don’t think there’s pressure but there’s a huge expectation around the team.”

Malawi also won their Group F match, leaving them just behind Nigeria at the top of the table locked on five points, but trailing on goal difference.
Nigeria’s next World Cup qualifying match will be against Kenya away in Nairobi in June.