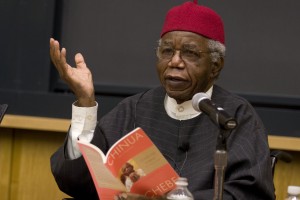 Nigerian governors on Friday joined the world in mourning Chinua Achebe, the literary icon who passed away.

Governor Babatunde Fashola of Lagos State on Friday described the death of Achebe as a great loss to the literary world and humanity.

In a statement by his Special Adviser on Media, Mr. Hakeem Bello, Fashola said Achebe was a “towering African figure, whose personality transcended the walls of ethnicity and religion.”

“Nigeria, Africa and the black race owe Achebe a wealth of gratitude and honour for his uncompromising stand against all forms of colonialism and man’s inhumanity to man,” Nigeria said.

In a condolence message by his Chief Press Secretary, Peter Okhiria, Oshiomole said the late author of Things Fall Apart left an indelible print in the sands of time. He said, “On behalf of the people and government of Edo State, I wish to commiserate with the governor and the good people of Anambra State on the death of the literary giant, Prof. Chinua Achebe.

“With Achebe’s death, Anambra State and indeed Nigeria has lost a major personality, who played a unique role in its modern history. As an intellectual giant, his voice resonated with clarity and authoritative distinction on matters of national interest.”

The Oyo State governor Abiola Ajimobi on his part described the death as a rude shock for Nigeria.

Speaking through his Special Adviser on Media, Dr. Festus Adedayo, Ajimobi described Achebe as a literary scholar, who, through his story-telling acumen, told the Nigerian/African story to the subconscious of the entire world, by so doing, showing the world that Africans possess a rich cultural heritage comparable to any people’s in the whole world.

Ajimobi recalled that through Achebe’s novels like A man of the People, which was written before the first military coup, the author demonstrated that a writer could be a seer as the book, which documented pitfalls of the political class, also predicted the military coup which eventually swept off the political class and signalled a long romance between the country and the military.

In a statement by his Chief Press Secretary, Christian Ita, the governor said Achebe was not just an iconic writer, but also a moral compass for Nigeria and Africa.

“His literary offerings made name for Nigeria, while his moral interventions ignited and deepened national discuss on several key issues in the country.

“Nigeria and Africa have lost their most iconic cultural figure. A writer of whom Nelson Mandela said, “In his company, the prison walls came crashing down,” Imoke said.

Governor Rotimi Amaechi of Rivers State has similarly expressed shock and sadness over the passing on of Achebe.

Amaechi, who spoke through his Chief Press Secretary, Mr. David Iyofor, described Achebe as one of Nigeria and Africa’s finest literary giants, whose works speak volumes.

He said, “I love and have read A man of the people over and over again, mostly because of its portrayal of leadership as it is in Africa. I have also commissioned a movie to be made out of it for the benefit of more people, especially our youths, who are the leaders of tomorrow. It is such a shock to me that our dearly beloved Achebe, the man who gave us several notable works of literature, is gone.”

Governor Rauf Aregbesola of Osun State also described as great loss, the death of one of Africa’s most celebrated authors, Prof. Achebe.

Aregbesola, in a statement by the Director, Bureau of Communications and Strategy, Office of the Governor, Mr. Semiu Okanlawon, said the loss was monumental.

He said Achebe’s writings contributed immensely towards putting Nigeria on the global map of literature.

“Through his writing, he carried the Nigerian cultural values to the whole world and with the translation of his works into several languages across the world, the history and culture of our people, especially those of the Igbo extraction, have been etched permanently on the psyche of the world,” Aregbesola said.

For Governor Rochas Okorocha of Imo State, the news of the demise of Achebe was a great shock.

Okorocha’s media aide, Mr. Ebere Uzoukwa, in a statement on Friday, quoted the governor as saying, “Prof. Achebe’s demise is a colossal loss to Nigeria and the Igbo nation, having contributed eloquently to the education sector and overall nation building through his internationally accepted literary works, constructive criticism and of course his uncompromising war against social malpractices.”

Okorocha described Achebe as “a literary giant with an extra-ordinary intellectual background,” whose death has created a vacuum in the literary world.

In a similar vein, Delta State Governor, Dr. Emmanuel Uduaghan, has described the late essayist, poet and celebrated novelist as a true patriot, whose love and passion for Nigeria cannot be doubted.

In a statement by his Press Secretary, Felix Ofou, the governor said though there were moments when the late teacher of African Literature were at variance with the authorities, he left no one in doubt as to his depth of love for Nigeria.

He described Achebe’s death as a big blow to Nigeria, the academia, particularly African literature, as well as all lovers of democracy and good governance globally.

To Governor Abdulfatah Ahmed of Kwara State, the death of Achebe was the exit of a remarkable African literary genius and promoter of African culture per excellence.

Ahmed, in a statement by his Chief Press Secretary, Alhaji Abdulwahab Oba, said Achebe’s incursion into the creative world through works like Things Fall Apart, Arrow of God, No Longer at Ease, helped in pushing African literary creativity to the front burner of world attention.