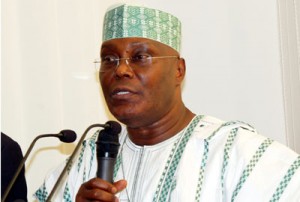 Former vice-president, Alhaji Atiku Abubakar, has lashed out at the Peoples Democratic Party (PDP), the Action Congress of Nigeria (ACN) and other political parties for lack of internal democracy.

Atiku made this known in a lecture he delivered to mark the Golden Jubilee of the Department of Political Science of the University of Ibadan (UI), on Wednesday. He accused the parties of promoting politics of godfatherism and dictatorship, since Nigeria’s return to civilian administration in 1999.

Atiku, who said he was a victim of the brazen undermining of the principle of internal democracy by parties in the past, said many of the leaders still carry on with the military mentality in a democracy: “Rather than practice democracy in their internal affairs, what we have had is continuous deteriorating in internal party democracy and the rise of the dictatorship of the executive power-welders, other party leaders and other godfathers,” he stated. According to him, the culture of impunity had been sustained because many of those imposed on Nigerians by the military at the threshold of civil rule about 14 years ago “also had military background themselves or served the military governments.”

Noting that the political elite had not “managed that military inheritance well,” he declared that “the ruling party, PDP, of which I am a founding member, has a greater responsibility in this regard. But it has behaved very badly indeed. The other parties have not done particularly better.” His lecture, entitled: “Thoughts on Internal Democracy in Nigerian Political Parties: Challenges and Strategies,” attracted many eminent dignitaries, including the academics, professionals, political leaders, traditional rulers and students.