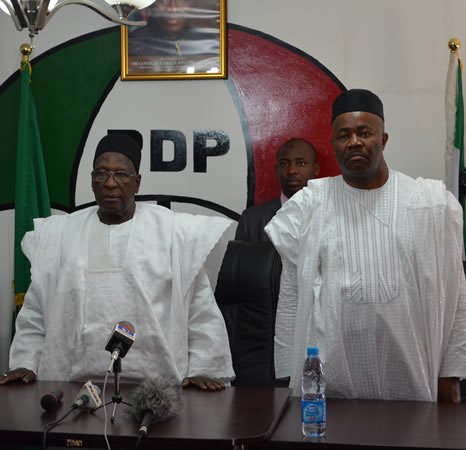 The PDP Governors’ Forum (PDPGF) has given the assurance that the party is equal to the task of ensuring development across the country.

The chairman of the forum, Gov. Godswill Akpabio of Akwa Ibom, gave the assurance while briefing newsmen after the forum`s meeting which ended in the early hours of Tuesday in Abuja.

“We want to reassure Nigerians who have reposed their confidence in us from 1999 to run the affairs of this nation that we are equal to the task and that we will not let them down,’’ he said.

He debunked the rumour that some PDP governors planned to join the yet-to-be-registered All Progressive Congress (APC), a group formed by opposition parties.

He added that the rumour was false, stressing that PDP governors and PDP states were intact.

Akpabio said that instead of any PDP governor defecting to opposition party, PDP governors were determined to work together for the party to win more states in 2015 through democratic process.

He said this would be achieved through the party`s good policies and delivery of democracy dividends in PDP-controlled states.

He expressed the confidence that non-PDP states would see the need to vote for PDP government in 2015 because of the development strides of the present PDP governors. (NAN)