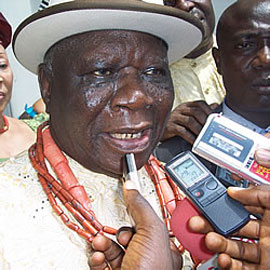 Clark who spoke while addressing journalists in his Asokoro residence – Abuja, described as malicious, insincere and dishonest, remarks by the governor of Niger State and Chairman, Northern Governors’ Forum, Muazu Babaginda Aliyu, that Jonathan signed an agreement with the governors not to seek re-election.

Clark said that “having emphasized that there was no such agreement, but in defense of the concept of agreement and for the sake of argument, if there was such an agreement, did you keep to your own side of the said agreement?”

Referring to the Niger governor, Clark said that “was that why you directed your state delegates at the PDP presidential primaries to vote for Alhaji Atiku Abubakar in the primaries and when he lost the ticket, you and your state went ahead to vote for a rival political party, the Congress for Progressive Change (CPC) in the Presidential election as shown in the results outlined below?”

Clark then recalled that Niger state “voted overwhelmingly for Major General Muhammadu Buhari (rtd.) of the CPC who scored a total vote of 652,574 against President Jonathan’s 321,429 votes in the Presidential election.”

The former Federal Information Commissioner also all but confirmed the choice of Jonathan as the sole candidate of the Peoples Democratic Party, PDP, should he decide to run in 2015 when he said, “it is the practice in most countries for the incumbent president to remain the sole candidate at the party’s convention if he is willing to contest for a second term in office.”