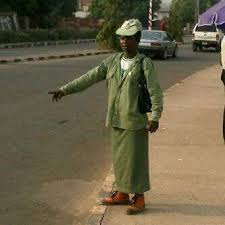 Authorities of the National Youth Service Corps (NYSC) on Sunday defended their action on the de-camping of one Miss Tolulope Ekundayo, a corps member who allegedly refused to wear trouser at the Sagamu Orientation Camp in Ogun.

Ekundayo, a 2013 Batch ‘A’ corps member posted to Ogun was de-camped on March 8, following disagreement between her and the authorities over her refusal to comply with camp dress code.

Ekundayo had insisted that wearing trouser negated her Christian faith and opted to wear skirt, instead of trouser.

The NYSC Director in Ogun, Mrs Theresa Anosike, who addressed newsmen in Sagamu on the matter, argued that Ekudayo’s actions contravened the rules and bye-laws of the the NYSC.

She said that Ekundayo’s actions were contrary to the undertakings she had earlier signed on dressing code.

“It is erroneous for anyone or group to say that the NYSC sent Ekundayo out of camp unjustifiably when actually she acted against the undertaking which she had earlier signed along with her colleagues on dress code,’’ Anosike said.

She quoted  the NYSC Bye Laws 2012 Section 3(h) which states that “Any member who refuses, fails or neglects to comply with this rule shall be tried by the Camp Court and if found guiltily, be liable to be de-camped and sent out of the orientation camp’’.

The director gave reporters copies of the undertaking which Ekundayo allegedly signed, along with other corps members on cultism and dress code.

Ekundayo had undertaken in the document, to abide by the rules of the NYSC and to face penalty if she contravened any of the provisions.

Anosike said the authorities made several unsuccessful attempts to persuade Ekundayo to wear the kit like her colleagues but that she argued that wearing the dress ran contrary to her faith.

Anosike quoted Ekundayo as saying: “I will rather forgo the service year than wear the kits.’’

The director said that Ekundayo was thereafter, told to go and return the transport and bicycle allowances she had earlier collected, having been convinced that she had made up her mind not to wear the trouser.

Anosike, however, dismissed reports that the NYSC authorities sent out the corps member late in the night.

“The incident happened a little about 9.00 p.m., so after she signed an undertaking and obtained a receipt for the refund she made, we asked her to go back to the hostel and prepare to leave the following day.

“She, however, quickly interjected and said that her father had already sent somebody to come and pick her and that the person was on his way.’’

“So, we decided to wait and at about 10:26 p m, a man came to camp claiming to have been sent to pick Ekundayo by her father.

“The man identified himself as Apostle Adenuga Otaru of the Antioch Church, Sagamu and also the Chairman, Remo Chapter of the Pentecostal Fellowship of Nigeria.

“At that point we asked the man to sign an undertaking which he did and the girl also signed an undertaking that she  knew and was familiar with the man who came to pick her up.

“Contrary to the rumour that we threw the girl out at night, we did not throw the girl out, she opted to leave the camp at the time in the company of someone she identified as having been sent by her father to pick her,’’ Anosike explained.

Share
Facebook
Twitter
WhatsApp
Previous articleMiracle In Church: Pastor Gets Triplets After 25 Years Of Childlessness
Next articleTonto Dikeh Cries Out On Twitter, Gives Her Life To Christ After Suffering Heartbreak, Read Her Tweets
- Advertisement -