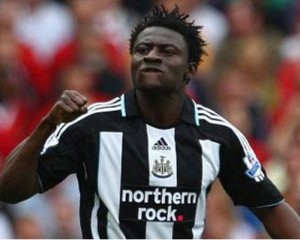 But Martins will have to wait for Levante’s decision on the proposed transfer to the MLS club.

“[Seattle] have spoken to me, and we’ve made a good deal. They’ve already had a conversation with Levante and I’m waiting for the club to tell me something.

Martins also made it clear he is “not happy with Levante,” which is why he wants to leave.

“I’m not happy with Levante, that’s something I’ve communicated with the club. It’s not about money that is not being paid.

“I came to Levante for very little money and they will receive more than what it cost to sign me, so it would be a good deal for Levante,” said the former Inter Milan man.

Martins has a €3 million buyout clause in his contract at Levante and the club have stated that they would only negotiate within the player’s release clause.

“We will not be negotiating the transfer of any player at this time and if an offer is received, it will be referred to said player’s release clause,” stated Levante.

Reports are already suggesting that Martins and Seattle Sounders have agreed a three-year contract with an option of a year, which will see the Nigerian earn around $2.5m per annum.