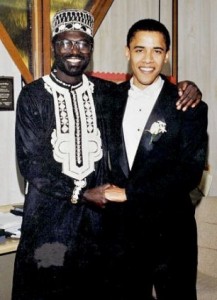 On the broiling shores of Lake Victoria, a man in Islamic garb is making a politician’s sales pitch to a group of baffled villagers and the resident witch doctor — a wild-eyed character with green and pink parrot feathers in his hair. He is pontificating on an oddly familiar theme: a time for change.

Yet the man on the election stump in this remote part of Africa perhaps has more right than most to appropriate the message that helped Barack Obama become America’s first black president. For the tall, paunchy figure trying to win over the villagers is 55-year-old Roy Abong’o Malik Obama, half-brother of the U.S. President and now following his famous sibling into politics.

Today, Kenya goes to the polls to choose a president, members of parliament and senators, county  governors and members of the newly-formed county assembly. Malik is standing for the position of governor of Siaya County, a role which would see him leading nearly a million people. Average earnings here are 100 Kenyan Shillings (about 80p) a day.

Not that hardship looms for their putative new leader. If he wins, the newest Obama on the political block will hit the jackpot — earning an annual salary of more than £100,000, which would take an average Kenyan 66 years to earn, and is the equivalent of £3 million in Britain, as well as perks which include a ‘retirement bonus’ of £75,000, a car, driver, VIP travel and bodyguard for life.

This is not the first time I have observed one of President Obama’s brothers at close quarters. Last year, I reported in the Mail how George Obama, 30 — born to the fourth wife of the President’s father — also hoped to stand for political leadership in Kenya. I tracked him down to a shack in a Nairobi slum, where he spends his days drinking moonshine and boasting about his Oval Office connection.

Like George, Malik is not shy about trading on the family name. Glistening with sweat, a white Arabic skull-cap on his head, he was to be found at the weekend standing on the back of a pick-up truck exhorting people to: ‘Vote Obama — vote for change.’

As he addresses crowds, his followers hand out leaflets featuring photos of him sitting in the White House with his half-brother.

‘Malik Obama has international connections which can attract investment to build factories and manufacturing industries,’ trumpets the text. ‘Malik Obama is a new leader who will bring new direction to our county.’

The leaflets add that charity does not alleviate poverty — it can only be halted by ‘empowering poor, youth and women by tapping their potential’

There is only one problem with these promises: they do not, as I discovered this week, appear to have much substance. Certainly any ‘tapping of potential’ appears to consist of Malik chasing, marrying and divorcing young local women.

Indeed, female members of his extended family accuse him of being a wife-beater and philanderer, who seduced the newest of his estimated 12 wives while she was a 17-year-old schoolgirl — a crime in a country where the legal age of consent is 18.

To the dismay of teachers and the girl’s mother, Mary, Obama had secret trysts with the girl after spotting her attending prayers at the mosque he has built in Kogelo — he and his brother’s ancestral home — as part of his promotion of the Islamic faith across the country.

Now in hiding at her mother’s mud house, down a rutted track, Sheila Anyango, 35 years younger than her husband, told me this week that marrying him was the ‘worst decision’ of her life — and confirmed that they had ‘kept a secret’ since she was 17.

Shy and softly-spoken, Sheila, 20, says: ‘At first he was good, after he started speaking to me at the mosque. But he has changed. Marrying him has been the biggest mistake of my life. He beats me, but mostly he’s just nasty and quarrelsome.’

Mary, 36, whose husband died from malaria soon after she gave birth to Sheila, can barely contain her fury. ‘He abuses my daughter,’ she tells me. ‘He is a bad old man. She was a child at school. There was no negotiation with me.

Sheila, who has an 18-month-old daughter by Obama called Hafifa, had spent the past two years living with three of Malik’s other wives at the ‘Barack H Obama Foundation rest and relaxation centre’ — a restaurant complex built by her husband to profit from the visitors attracted to the area by his links to his brother.

Nor is Sheila the only one of Malik’s wives to accuse him of beating her.

Hafsa Abwanda, now 33, also  married the politician as a teenager, but escaped in 2008 after five years of marriage, saying he beat her and her ‘co-wives’, of whom she says she saw at least 12 come and go over  the years.

Before Hafsa fled her miserable  marriage to live with relatives, she had a son with Malik, who she took with her when she left. ‘He is a bad man and I don’t want to ever see him again,’ she says.

With Islam allowing only four wives, former wives and friends say Malik flouts this rule by ‘rotating’ his spouses out to other properties so he lives with only the maximum number at any one time.

Fabulously rich by Kenyan standards, Malik is nevertheless careful with his money.

He pays his staff at the Obama Foundation less than £5 a week — without breakfast, lunch or dinner — and his workers spoke openly about their dislike for their boss with the famous name.

‘He doesn’t give a damn about other people,’ one of his employees told me. ‘We all have wives and children and he doesn’t pay us enough to feed them. But he’s happy to give young women money to come and live with him here.’

What’s more, Vitalis Akeche Ogombe, 63, one of the most respected elders in Kogelo, tells me Malik seethes with resentment that Barack, rather than he, is a world-renowned politician.

‘He is a jealous and selfish man,’ says Mr Ogombe. ‘He’s a rich man, but he’s mean with money and time. He won’t even give you a lift and just drives past alone when you wave. He thinks all the glory should be his. He wants to be a parallel force to Barack. I don’t like him.’

A former headmaster at the local school in Kogelo, Mr Ogombe knew Malik as a boy, and met Barack on his first visit to his homeland in 1987, when the future U.S. President spent his days in a simple room at his family home, and developed a taste for local home-brewed beers.

‘Barack was a nice boy,’ he says. ‘He wasn’t used to the heat here, so he spent a lot of time inside resting, but he loved our beers and was very friendly to everyone. Malik and he got along well — but that was when both were nobodies.’

So who is Roy Abong’o Malik Obama? He is the first son of Barack Obama senior. Aged 18, his father married Kezia, a local woman, in a tribal ceremony in Kogelo. She gave birth to Roy ‘Malik’ in 1958, and his sister Auma two years later.

But Obama Snr, a brilliant student, left her and her young children to take up a scholarship at the University of Hawaii. There, he had an affair with, and later married, Ann Dunham, an anthropologist from Kansas.

She gave birth to Barack Hussein junior, before the Kenyan dumped her, taking two more wives and having four more children — that are known about.

There were other women. But the future President Obama’s father slid into alcoholism and died in a car crash in Kenya aged 46. Barack is said to have struggled to come to terms with the fact his eight siblings have four different mothers.

Once a drug user and heavy drinker like his father before him, Malik gave up alcohol, tobacco and marijuana when his younger half-brother David was killed in a motorcycle accident after a night out together in Kenya in 1987.

He took a degree in accounting in Nairobi, studied at a madrassa — an Islamic school where students memorise the Koran — and became a committed Muslim. He moved to Washington DC in the Eighties and opened an electronics shop there, though he now divides his time between Kenya and America.

He is also a regular traveller to Saudi Arabia, where he has taken part in pilgrimages to Mecca. He now spends his time fund-raising for the Barack H Obama Foundation, a body he set up to capitalise on his brother’s election for the ‘good of Kogelo’.

But there have been questions about where the money has gone from his ‘charity work’, with a probe launched over cash owed to the U.S. taxpayer from his fund-raising activities. Famously, Malik’s conversion to Islam has been saluted by Barack, whose remaining family in Kogelo are all Muslims.

He asked Malik to be best man at his 1992 wedding to Michelle. In his book Dreams From My Father, the American President wrote: ‘The person who made me proudest was Roy [Malik]. He converted to Islam, and has sworn off pork and tobacco and alcohol.

‘[His] new lifestyle has left him lean and clear-eyed, and at the wedding, he looked so dignified in his black African gown with white trim and matching cap, that some of our guests mistook him for my father.’

But he had not always been so warm to his Kenyan half-brother. Indeed, when Barack gave him a gift of a tape recorder during his first visit to Africa in 1987, Malik expressed his disappointment that ‘it wasn’t a Sony’.

‘I nodded at him, trying not to get angry,’ Barack Obama wrote, noting that there was: ‘Something [about him] that reminded me of young men back in Chicago. An element of guardedness, perhaps, and calculation.’

For all that, in his bid to win political power Malik is certainly happy to highlight his relationship with his illustrious sibling.

Moments after I located his lake-side road show, a nine-hour drive from Nairobi, a man in a smart suit introduced himself as Malik’s ‘campaign strategist’.

Handing me his card and a bundle of leaflets, Professor Michael Muiga, a political strategist from Florida who had worked for the Democrats, told me he had ‘been ordered by Michelle’ Obama to come to Kenya and help him win.

‘He is the brother of the U.S. President,’ said Professor Muiga. ‘He can bring huge benefits to the area.’

As for Malik, he dismisses the wife-beating allegations as being ‘a matter of interpretation’, while his campaign strategist denies that he wants to introduce Sharia law to the area, banning alcohol and ordering women to cover-up.

But when the candidate granted me a brief audience, he would not discuss policies in detail.

‘I am an international figure, with traditional flair,’ he said grandly in his air-conditioned office at the Obama restaurant in Kogelo, where he keeps a private room of photographs of himself and Barack.

Disturbingly, there are also pictures of him with Libyan dictator Muammar Gaddafi and his feared intelligence chief — now awaiting trial for mass murder — at the  despot’s bunker in Tripoli.

‘I am tired now,’ he says, waving me out of his office. ‘I have just come back from India where I met spiritual leaders. I must rest now.’

Though I paid nothing to speak to him, there have been reports that he asked a journalist for $1,000 in exchange for an interview.

So what are his chances of winning? It’s hard to judge, though the Kogelo headman says he won’t vote for him. Nor will staff at the Barack Obama Foundation, or the family of his latest runaway bride.

‘Will I vote for Malik?’ Sheila, the young mother of his youngest child, asks me incredulously. ‘I wish I could never hear his name again.’