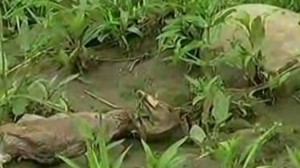 First a river that feeds into Shanghai was was filled with dead pigs, now a second river is flowing with dead animals of a different feather.

Dead ducks — more than 1,000 of them — were found in a river in southwest China’s Sichuan province, according to state news agency Xinhua.

More than 1,000 dead ducks have been removed from a river in southwest China.

The birds surfaced in 50 plastic woven bags in the Nanhe river in Pengshan county. BBC reported that Liang Weidong, the deputy director of Pengshan’s publicity office, said that authorities became aware of the situation on Tuesday. They have since removed more than 1,000 deceased ducks, which have been disinfected and buried in a designated area, Liang said.

The news of the deceased birds came after officials reported that the number of dead pigs removed from a Shanghai river has surpassed 16,000.

Officials have not determined what killed the ducks, and an investigation is ongoing to see where the birds came from, according to Xinhua.

Local officials said the residents are not at risk because the Nanhe river is not used for drinking water.

The river is not used for drinking water, and BBC reports that officials have told residents that they are not at risk.

Earlier this month, officials began removing dead pigs from Shanghai’s Huangpu river, which provides the city with 22 percent of its tap water. The deceased hog toll has surpassed 16,000. The origin of the pig corpses remains a mystery, and the swine scandal has sparked public concern.