A series of car ads, including one showing women bound and gagged in the trunk of a Ford driven by former Italian Prime Minister Silvio Berlusconi, has prompted Internet outrage in India and prompted an apology from Ford India.

The ads came just days after India approved a tougher new law to punish s*x crimes, following the fatal gang molestation of a student in December. That attack sparked unprecedented protests over the treatment of women in the country.

The ads, uploaded on an industry website, were created by individuals within JWT India, a unit of the world’s biggest advertising group WPP. They did not go through the normal review and oversight process, Ford India said.

“We deeply regret this incident and agree with our agency partners that it should have never happened,” the company said in a statement.

“These posters are against the standards of professionalism and decency within Ford and our agency partners, and weren’t part of any projects that Ford and WPP are working on, or for any commissioned commercial use.”

Ford India did not comment on whether it was taking any action against the agency.

One of the ads shows Berlusconi, charged in Italy with paying for s*x with a minor, sitting in the front seat of a Ford Figo hatchback flashing a victory sign, with a trio of half-dressed women tied up in the trunk.

Another ad in the same series featured a caricature of celebrity Paris Hilton in the driver’s seat, and three women resembling the Kardashian sisters bound in the trunk with the tagline “Leave your worries behind with Figo’s extra-large boot”. 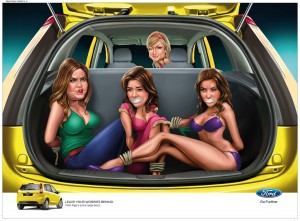 “This was the result of individuals acting without proper oversight and appropriate actions have been taken within the agency where they work to deal with the situation,” WPP said.

The workers involved have since been sacked by the company, reports say.

“If this is what Ford represents, I will never buy Ford again, and try my best not to sit in one,” a Facebook user said. [Reuters]