The sitting of the Election Petition Tribunal yesterday ended brutally in Ondo State, as supporters of the Action Congress of Nigeria, CAN and those of the ruling party in the State, Labour Party clashed, injuring four persons in the process.

According to reports, the clash occurred few minutes after the three member tribunal led by Justice Andovar Kaka rose after the counsel to the Independent National Electoral Commission, INEC, Chief Gboyega Awomolo, SAN, announced that he would not present any witness.

In a swift response, police authorities deployed about 30 armed mobile policemen to the premises of the Akure High Court where the tribunal is sitting over the petition of the PDP and ACN challenging the victory of Governor Olusegun Mimiko in the October election. 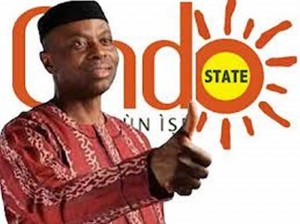 .
The supporters of the ACN alleged that the supporters of the Labour Party were the first to attack them after the tribunal rose as they were hailing the candidate of their party in the October 20 governorship election, Rotimi Akeredolu, who was leaving the premises of the court.

But the LP said the ACN supporters while hailing their candidate after the tribunal rose threw stones at them earlier while they were waiting for the tribunal to resume for the day.

The injured persons were taken to the state specialist hospital in Akure for treatment as policemen calmed the area.

Policemen however arrested one of the thugs in the clash that disrupted vehicular movement for more than 30 minutes.

Contacted the police PRO, Wole Ogodo confirmed the clash but said the situation is now under control.

Ogodo said that more policemen have been drafted to the venue of the state High Court to forestall any break down of law and order.

The Counsel to INEC Chief Gboyega Awomolo SAN had on Monday told the court that the commission was not going to call any witness going by the ruling of the tribunal on February 4 this year.

According to him, the commission having reviewed the pleadings of the petitioners have concluded that the key allegation against it relates to that of manipulation of INEC voters register used in 2012 election, adding that “this matter had been ruled upon by this tribunal on February 4 this year.

Awomolo said INEC following the ruling of the tribunal which the petitioner had since appealed at the Appeal Court, will rely on evidences derived under cross examination and will not call any additional witness.

On February 4, the chairman of the tribunal Justice Andovar Kaka’an struck out substantive paragraphs of the PDP’s candidate submitting that they were vague and speculative and 20 paragraphs of the petition of the Action Congress of Nigeria (ACN) for not joining the necessary parties affected by the paragraphs which alleged criminal activities during the election.