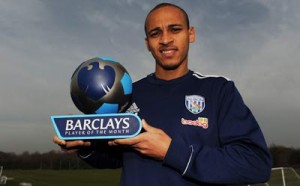 Peter Odemwingie has launched a fresh Twitter attack on West Brom after being consigned to the substitutes’ bench since his failed bid to leave The Hawthorns in January.

Odemwingie delivered a series of Twitter rants against the club after having a transfer request rejected at the start of the year, and he has once again vented his frustration after being omitted from the Baggies’ starting line-up for the last four games.

He tweeted on Sunday: “Keeping me on the bench now is worst than what they did on the 31st. New advisers told me to take saying its all my fault cos its better for me. If they like they shouldn’t even give me 10 mins to play. Threatening to ruin my career? Career I closed already last summer? No harm to me. Want to treat me like an average player. The abuse and praise I get is it average ? So get some extra from me too.”

The 31-year-old striker had been a target of QPR throughout January and had repeatedly voiced his displeasure at not being allowed to leave. Odemwingie then memorably turned up at Loftus Road without permission on transfer deadline day only to be left in the cold as his planned move to QPR collapsed, an act described by Baggies head coach Steve Clarke as “total lunacy”.

The Nigeria international last month apologised for his actions during that period and also accepted the disciplinary action taken by West Brom for his conduct. The Baggies would have been hoping that was the end of the issue but, after only featuring as a second-half substitute in the club’s recent fixtures, Odemwingie has once again hit out.

He continued: “Former Albion sporting director in the presence of the new and Manager apologised to me in private. Publicly not good ?

“Drive was lunacy ? Missing in the training section that day also lunacy ? They forgot to complain about that though cos they knew were I was.

“Things have almost got back to normal till Peter spoilt it again. What’s normal ? We see things differently obviously.

“Has anyone seen me give interview to clubs website for a year now ? What about an interview in match day magazine ? I am on my own there.

“Was ready to give half of the contract there and earn less to make it happen. Forcing a move really is when u want to leave 4 free.Sportblog