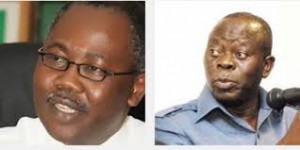 The Council Chambers of Aso Rock Presidential Villa yesterday witnessed a mild drama as Governor Adams Oshiomhole of Edo State and Mohammed Adoke, Nigeria’s Attorney General and Minister of Justice exchanged hot words and even came close to exchanging punches save for the intervention of Chief of Staff to the President, Chief Mike Oghiadomhe and other Governors at the venue.

It was initially unclear what caused the altercation, but it was later gathered that the source of disagreement between the two was what Governor Oshiomhole regarded as unnecessary trivialisation of last year’s murder of his private secretary, Comrade Olaitan Oyerinde in Benin, Edo State, who was killed at his residence just before the Edo State governorship election.

During a recent sitting of a panel set up by the House of Representatives to probe the murder, Governor Oshiomhole had lamented the shoddy handling of investigations into the murder by the Police and the Federal Government.

A representative of the Attorney General had at the sitting told the lawmakers that the office of the Attorney General was confused on how to handle the murder case. Adoke however wrote to the panel the next day, disowning the claims of his representative, while arguing that the case was a state matter. It was learnt that this was what started the disagreement between Oshiomhole and Adoke in the Council Chambers yesterday.

According to sources, Adoke had approached Oshiomhole just before the commencement of the meeting to ask him why he allowed himself to be misled by Edo state Attorney who should have known that Oyerinde’s case was a state matter.

But the Governor did not find funny what he perceived to be an attempt by Adoke to trivialize the murder of his aide and in the ensuing exchange of words, accused the AGF of disrespect and being a dishonourable law officer.

The two charged towards each other in the heat of the exchange of words before their colleagues moved in to calm tension just before President Jonathan walked into the venue.

“The issue is that he was saying my Attorney General should have known what to do, that he has nothing to do with the matter. And I simply asked him who referred the matter to him, was it my Attorney General?” Governor Oshiomhole told journalists while recounting the incident.

The Governor who accused the AGF of politicizing the murder case said it was the Deputy Inspector General of Police who referred the case to the federal government and was trying to politicize the issue by dragging Adoke in into it.

“Should we assume that a DIG did not know that the offence of murder is a state offence? And if he knew it was a state offence, why did he refer it to the Federal Attorney General. And I said if he has any complaint he should complain to the DIG who referred the case to him. And of course the rest you witnessed”, the Governor added.

Oshiomhole who added that he had also complained that the case ought to have been referred to Edo State Director of Public Prosecution because the matter is a state offence, committed in Edo State, accused the AGF of trivializing the issue because he did not think life is important.

“I was surprised that for the Attorney-General, it is something he can afford to joke with, telling me that my Attorney- General didn’t know what to do. I always say to people that today all of us are in power tomorrow none of us will be in power. If we leave Nigeria worse off, we will wallow in a hopeless situation. If we build it and make it safe, we will walk in freedom, but let us all know that of all of us today, our next position is ex-this and ex-that. I am always conscious of that”, said the Edo State Governor who vowed that he will not compromise on the death of any Nigerian particularly someone who had worked with him using the popular refrain of leaving it “in the hands of God.”

Adoke who described Oshiomhole as his friend however refused to elaborate on the cause of the disagreement when accosted by journalists, arguing that he has the highest respect for the Governor and his office. [PMN]