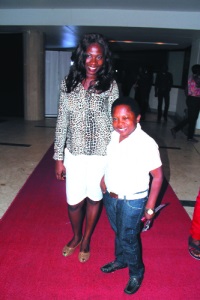 Nearly two years after their talk of the town wedding, Nollywood super star Chinedu Ikedieze famously known as Aki and his amiable wife Nneoma, wowed many, especially his teeming fans with what could be described as their first public appearance.

The rare public appearance was at Bovi’s Man on Fire Comedy Show, which held recently on the Island.

Photographer spotted the love struck couple walking in hand in hand at the Eko Hotels venue of the comedy show that was hugely attended.

In fact, Mr. and Mrs. Ikedieze played the perfect Romeo and Juliet in the full glare of the public as they didn’t leave each other’s sight throughout the period the show lasted.

The couple’s public display of affection for each was very obvious on the red carpet with Aki pampering and treating his jewel like the real queen that she is.

The famous entertainer was swathed in a blue denim atop a white shirt that equally complemented his black pair of shoes. While his sweetheart, opted for a knee length white knicker on a flowery gray top that fitted her sexy shape.

From the look of things at the venue, it was obvious the couple thoroughly enjoyed themselves while the show lasted.

Meanwhile, what many thought was a mirage became reality in late 2011 when the actor wedded Nneoma, his angel of over two years.

The much talked about nuptial climaxed with a star- studded and glamorous wedding reception in Lagos, after a traditional union that earlier held in Mbano,Imo State .