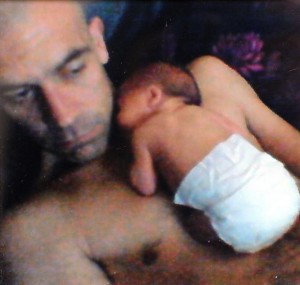 A heartbroken mum has revealed how her premature son was tragically killed — by a loving kiss from his doting dad.

Little Kaiden McCormick was struck down by a cold sore virus caught from Carl Maclaren, 34.

He spent six weeks on a life-support machine as doctors worked frantically to save him.

But he died aged just two months. The cause of death was multiple organ failure triggered by the herpes simplex virus.

Mum Marrie-Claire McCormick, 28, told of the horrifying moment they learned what had stricken Kaiden.

She said: “When they said herpes, I just couldn’t believe it. I asked how it was possible for a baby to have herpes.

“When they said it was transmitted via the cold sore virus I looked at Carl and he instinctively touched his lip.

“In that moment, I saw his heart break in two. Carl just broke down.

“He was totally distraught and kept saying he blamed himself. But I never once blamed Carl.

“All he’d ever done was shower our baby with love and affection. He’d been the perfect father. I hated seeing him punish himself.”

Painter and decorator Carl, of Bootle, Merseyside, said: “I blame myself but I had no idea. Obviously if I had I wouldn’t have gone near him and he’d still be here today.”

Kaiden was born five weeks premature on March 28 and was allowed home after three days.

But after refusing to take his bottle he suddenly turned blue — sparking a terrifying emergency.

He was rushed by ambulance to Alder Hey Hospital, Liverpool. But after 48 hours, doctors warned his survival chances were slim.

Doctors were obliged to inform the police the illness was unexplained. But no charges were brought after the death was confirmed as a tragic accident.

Now the couple are calling on the Government to make sure expectant parents are aware of the risks cold sores pose.

Marrie-Claire, who is pregnant again, said: “There’s only one thing that comes anywhere close to the pain of losing our son, and that’s the anguish of knowing his death could have been prevented.

“Nobody told us that Carl’s cold sore posed suck a risk. We showered him with love and kisses.”

She added: “Now all we can do is warn other parents to save them the same pain and suffering.

“No baby should die from a kiss. We don’t want Kaiden’s death to have been in vain.”