Home Lifestyle Photo: Be The First To See The New Fastest Car in the...
Facebook
Twitter
WhatsApp 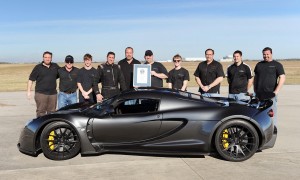 Of cause you wouldn’t believe you are the first to see a car that was produced thousand of miles from here, but here is the truth, you just logged in to see a car that beats everything car when it comes to the dash.

There’s a new record holder for the fastest car in the world, the Hennessey Venom GT.

The Venom broke the record by accelerating from zero to 186 mph in 13.63 seconds, reports CelebrityNetworth.com. The previous record holder, Koenigsegg Agera R, made that acceleration mark in 14.53 seconds. The Agera R had broken the Bugatti Veyron’s earlier record only six months ago.

Bugatti still has bragging rights, though. While the Venom GT hit 205 on the straightaway, neither it nor the Agera R came close to breaking the Veyron’s top-speed record of 268 mph. However, the Venom team believes 270 mph is an achievable goal for the car on the right test track.

The Venom GT comes with a sticker price of $1.4 million. That’s affordable compared to the Veyron’s $2.4 million. It remains the most expensive, if not always the fastest, car in the world.