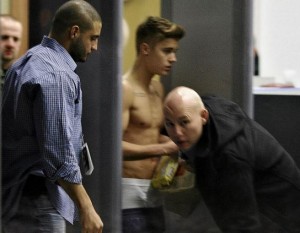 Though Olivia Wilde tried to plead with him quite reasonably, Justin Bieber is back to his shirtless ways.

The 19-year-old singer was seen passing airport security in Lodz, Poland, on Monday. For whatever reason, he thought it was appropriate to take his shirt off, again.

Now, we’ve all passed through airport security at some point and we all know it’s no laughing matter. Shoes often need to be removed as well as belts, keys and phones. But shirts? Whatever Bieber’s shirt was made out of, it likely doesn’t need to be removed. It’s not made of metal.

To make matters worse, the temperature in Lodz at the time was about 14 degrees. “He wasn’t told to take off his clothes,” a spokeswoman for the Lodz airport told Reuters. “He had no metal objects on him. He’s quite skinny so I assume he was probably freezing.”

This is hardly the first time the Biebs has been photographed with his shirt off (exhibit A: his much talked-about 19th-birthday celebrations in London earlier this month).

More often than not, he’s also the one doing the snapping. As a big fan of his own ripped abs, Biebo likes to share his grown-up belly with his fans.

Last time the media paid attention to his rather odd behavior (constantly shirtless, lunging at the paparazzi, those types of things), Bieber took to Instagram to “clear things up.” We wonder what he’ll have to say for himself this time.