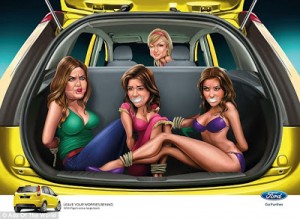 The Kardashian sisters have been the subject of much spoof material.
But the latest offending item is not one Kourtney, Kim and Khloe are taking lightly.
The reality star siblings have confirmed they will be taking legal action after an image from an advertising agency working on Ford’s Figo car showed them bound and tied in the trunk of a vehicle.In a statement obtained. INSIDER from their family attorney regarding the controversial Ford Motor Company advertisement, they said: ‘The “leave your worries behind” Ford ads are disgusting, vile and offensive to all women.
It is unacceptable that Ford would align itself with an ad agency that would so carelessly release these ads. The Kardashians do not take this lightly and they are exploring all of their legal options.’
Posters for the compact sedan were uploaded to the internet featuring notable personalities, including reality TV starlet Paris Hilton and disgraced Italian politician Silvio Berlusconi, smiling with glee at seeing their rivals, bound, gagged and stuffed in the car’s trunk.

The images were supposed to advertise the sedan’s spacious cargo area but Ford has since issued an apology and chastised the outside ad agency who publicized the artwork.
The drawings were developed by a young creative team at JWT India, an advertising firm owned by the WPP Group.
They were uploaded to the AdsOfTheWorld website without agency or client authorization, a spokesperson for JWT told the MailOnline.