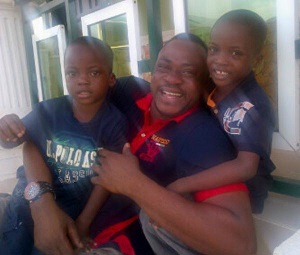 To many lovers of Yoruba movie industry, the name Odunlade Adekola is like what Omotola Jalade Ekeinde or Genevieve Nnaji mean to Nollywood.

No wonder he is one of the highest paid actors in that sector of the Nigerian film industry.

Apart from being an actor, Odun, as he is well known by fans, is also a Glo ambassador.

He has also had his share of romantic scandals since gaining fame some years ago. Not too many people know that the Abeokuta, Ogun State-based actor is married with kids.

We got hold of a picture showing Odun having fun with his two sons. The children took after him as the boys are replica of Odunlade Adekola also known as Sunday Dagboru.