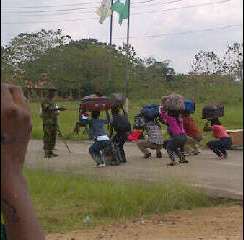 For those who have undergone the mandatory one year of national service to the father land or have relatives or friends who have ‘served’ or still in service, it is not uncommon to hear tales of military brutality and high handedness during the three weeks of orientation/camping activities.

The photo to the left tells a very well-known story – of graduates dehumanized and meted all sorts of punishment in the name of discipline.

The people in the photo are graduates who reportedly came late to their camp in Nasarawa State, north-central Nigeria and were forced to do the frog jump with their boxes on their head by a soldier on duty.

Is this punishment justified or is it simply demeaning?