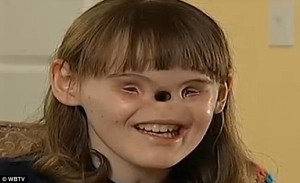 A North Carolina teen born with a rare condition that left her without a nose or eyes is preparing for her final operation which will give her a real nose.

Cassidy Hooper, 16, will undergo three surgeries at Levine Children’s Hospital in Charlotte over the course of two weeks that will create a nose from cartilage and bone taken from her skull.

And the good news has left the energetic teen ecstatic because for the first time she will be able to smell and breathe through her own nose.

When she was born, her condition left doctors baffled, especially since had no other medical problems and leads a healthy life.

‘Her heart and brain are normal,’ said her mother, kindergarten teacher, Susan Hooper to ABC News.

‘Nothing else is going on with her.’

The inspirational teenager has been going through skin graft surgeries to adapt her face since she was 11 years old and is pleased to be entering the final straight.

‘I’ll have a real nose like everyone else’s,’ said Cassidy.

In the past, Cassidy used prosthetic eyes, but since they cost $5,000 each, the Hooper’s could not afford to keep replacing them as their daughter grew.

‘Insurance didn’t pay one cent,’ said Susan, 42. ‘We had already started the process to do her nose, moving her eyes closer together and having her skull reshaped. We were not going to pay for it then have to pay again.’

Experts who spoke to ABC News explained how the surgery to replace Cassidy’s nose will be completed.

‘The nose is a little like the ear — what you see isn’t functional,’ said Dr. Sherard A. Tatum III, director of facial and reconstructive surgery at Upstate Golisano Children’s Hospital in Syracuse, N.Y.

‘A lot of people have noses they lost to trauma and cancer and breathe fine and have a sense of smell. The nose is something we expect to see in its conventional place and it’s good to put glasses on, but it’s not 100 percent necessary.’

‘The soft tissues that make up the inside and the outside skin and mucus membrane don’t have a lot of strength to stick out of the face like the nose does. You can’t just slap some skin up there and make it look like a nose.’

Cassidy’s doctors have taken a layered approach – placing the inside membrane first, then using cartilage and bone from her skull create a nose structure and then cover it with skin.

The hardest part for Cassidy has been overcoming the social difficulties.

She has been attending Governor Morehead School, a specialist school for the blind since the fifth grade and deals with taunts from children well.

‘Honestly, there’s been a bit of teasing, but not more than any other child on a regular day,’ said her mother.

Active and confident, Cassidy is involved with track and field and has even taken up the winter sport of curling.

She dreams of being a radio broadcaster and has recently appeared on the airwaves at her local radio station.

‘It was the first time and I actually did my own radio broadcast for an hour — I took over,’ said Cassidy.

‘I have been listening to radio since I was younger, and I like how they do it. I am interested in jingles.’