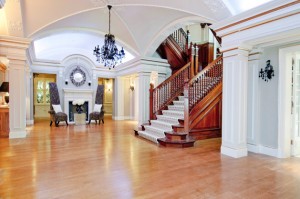 The most expensive home on the market in Britain has been forced to slash its asking price by a staggering £35 million.

But a lack of interest in the Grade II listed home has seen the owner, property tycoon Andreas Panayiotou, drop it to a “more realistic” £65 million.

The £35 million difference is enough to buy a six-bedroom Georgian terrace in upmarket Belgravia or 215 ‘average’ UK homes priced at £162,000.

Mr Panayiotou bought Heath Hall, which was built in 1910 for sugar magnate William Park Lyle, in 2006 after it had fallen into disrepair.

He then spent £40 million transforming it into one of the most impressive homes on The Bishops Avenue, an exclusive road in Hampstead known as Billionaires’ Row.

The home – the most expensive currently for sale on the open market- is now being marketed by high end estate agency Knight Frank.

Grant Alexson, head of Knight Frank’s Hampstead office, said: “The £65 million price is more realistic. It is not a bargain, but there is no house like it.

“It is beyond ambassadorial, it is the sort of home which is perfect for kings or princes.

“It has a terrific plot and is one of the largest houses in the area. It has the largest front of any home on The Bishops Avenue and this is important.”

The Bank of China took over Heath Hall in the 1950s and housed their staff in communist conditions, almost turning the mansion into a hostel with workers sleeping on bunk beds.

When Mr Panayiotou bought it in 2006, he set about transforming it into one of the capital’s finest homes.

The East London-based businessman employed a team of 120 tradesmen for the renovation, adding a further 8,000sq/ft to the already substantial 19,000sq/ft.

Twelve types of Italian marble and seven types of wood were used for the bathrooms while the snooker room, office, bar, library and grand staircase are all clad in Oak.

All of the carpentry and hand-carved marble basins were prepared in Italy before being transported to the property.

Bishops Avenue is now known as Billionaires’ Row because of the incredible wealth of the residents which include the Saudi Royal Family.