Any wedding is a big deal for the participants, but preparing a wedding for two little people was no small order. When 4-foot, 2-inch Matt McCarthy, a Los Angeles-based entertainer, decided to propose to his girlfriend, 3-foot, 5-inch “Amazing Ali” Chapman, their friend, Todd Ray of the Venice Beach Freakshow, wanted them to do it up big. 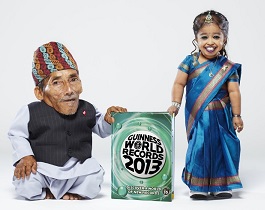 His wedding to Lavinia Stratton was considered by many to be the wedding of the 19th century. The couple even honeymooned with Abraham Lincoln at the White House, according to Thumb’s biographer, Melanie Benjamin. Ray feels strongly that Chapman’s wedding to McCarthy will be just as significant, but admits “history will decide if that’s true.”

The wedding will be featured on Thursday’s episode of the AMC reality show “Freakshow,” and Ray is especially happy with Chapman’s wedding dress, which was made by his mother, Nona Noblitt. “She’s been a seamstress all her life,” Ray said. “It’s the most beautiful wedding dress.”

In keeping with the fact that Ali works at the Ray’s sideshow, the wedding is held there. Chapman’s maid of honor is a bearded lady while McCarthy’s best man is George Bell, who is 7 feet, 8 inches, is the second tallest American. Ray said the couple is happy, but there are still some ongoing discussions. “Matt wants kids, but Ali isn’t sure,” he said.