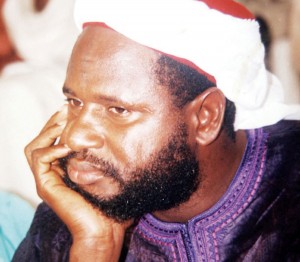 Yerima, who was a guest was on the radio programme was quoted to have said if the Independent National Electoral Commission failed to register the newly formed All Progressives Congress, leaders of the party would embark on a peaceful protest to the Eagle Square, Abuja until INEC registered the party.

Following the Senator’s statement, the state Police Commissioner, Mr. Olufemi Adenaike stormed the radio station with his men who took Yerima away to the police headquarters where the former governor was held for three hours.

Supporters of the Senator it was learnt, later mobilised themselves to the police headquarters but were resisted by the policemen on guard.

Yerima was however released after being interrogated by the police.

Reacting to news of the Senator’s arrest, the CP told newsmen that the Senator, who is one of the coordinators of the APC, was not arrested but merely invited to clear the air on the statement he made at the radio station.

The commissioner said he was inundated with calls from concerned citizens of the state on the inciting statement. “All I did was to go to the radio house and I met the distinguished Senator and I said, Please, I want to know what you said,” he said.

“He (Yerima) said, ‘no problem, let me finish. And I will come with you to the office.’ That was what transpired,” the CP clarified.

“If you were in my shoes as the commissioner of police and you start getting calls from concerned citizens of the state that somebody has made an inciting statement on radio, will you go to burukutu (local brew) joint and start drinking? You have to make a move.

“I am surprised that people are saying many things like, ‘CP has arrested him, CP has orders from Abuja.’ The distinguished senator is not under arrest.

“All we did was to find out what he said. And he said they were going to go on a peaceful demonstration. And I said define what you mean by peaceful demonstration, considering that Kaduna State is a volatile state. I don’t want anything to happen in my domain. I am completely satisfied with what he has said. And he is free to go. There was no directive from anywhere. We were doing things on our own.”

The former governor who was taken to the police headquarters, was made to write a statement on what he said during the radio programme.

“My name is Senator Ahmed Rufai Sani former Governor of Zamfara State, a Nigerian and now a distinguished Senator of the Federal Republic of Nigeria. Federal Radio Corporation of Nigeria Kaduna invited me for a phone-in programme which took place today March 9, 2013 at 10am and ended at 12pm. I was asked if there is any move not to register our new party, APC, what can we do? And my response was that if we met all the legal requirements and INEC refused to register us, we shall embark on peaceful protest to INEC until we are registered. Then, the moderator asked me what I meant by peaceful protest? Then I responded by saying just like it happened in Egypt.

“We can go to Eagle Square together with Gen. Muhammadu Buhari, Asiwaju Bola Tinubu, Sardauna Kano, Alhaji Ibrahim Shekarau, and others to mobilise people without using any weapon for a peaceful protest until our party is registered,” the statement read in part.