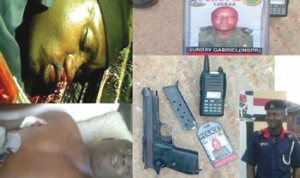 Two officials of the Nigerian Civil Defence and Security Corp were on Tuesday, killed by gunmen, alleged to be officers of the Nigeria Police Force in Isawo area of Ikorodu in Lagos State.

The deceased officers are identified as Innocent Akhigbe, an inspector and Gabriel Adaji, an assistant inspector. The slain officials were reportedly on routine surveillance of pipeline facilities in Ikorodu, when they were reportedly waylaid.

The NCDSC officers, who escaped the attack, however, recovered an identification card belonging to a police inspector and a service pistol.

A source at the headquaters of NSCDC informed the Nigerian Tribune that the policemen were collaborators with pipeline vandals in the area.

The source said that some oil thieves, who had earlier escaped from the civil defence officials, mobilized the policemen, who launched the attack.

It was gathered that the civil defence officers, who were in two Hilux patrol vans invaded Ikorodu area and arrested some pipeline vandals.

“Some of the vandals escaped, after they could not withstand the civil defence officer but four of them were arrested “the source told the Nigerian Tribune.

It was while the NSCDC were leaving the scene that an unmarked Toyota Corolla crossed their vans and some gunmen opened fire on them. One of the officers died on the spot, while the other died at an unnamed hospital, where he was rushed to.

Meanwhile, the image maker in charge of the Lagos State police command, Ngozi Braide,
while reacting to the incident, through a press release made available to the Nigerian Tribune, also claimed that a police team was attacked by civil defence officers.

The police in the statement stated that: “At about 0145hrs of date, there was a distress call from DM security PPMC, Mosimi that they were experiencing drop in pressure on the pipeline,” and added that “the Unit Commander in charge of Konu immediately pulled out his men on Konu axis under Inspector Sunday Gabriel to proceed to the scene.”

The statement from the police also read that: “As they were approaching, they heard sounds of serious gunshot in their area of pipeline coverage and the inspector instructed his men to proceed to that direction as it could be the activities of vandals.”

The statement further read that: “Upon arrival, they saw a group of Civil Defence Corps Members coming out from the direction where the shooting was earlier heard. The NSCDC men challenged the policemen who were about four in number on what thei mission was in the area, “saying that it was their sole responsibility(Civil Defence) to guide and protect pipelines.

“At this juncture, there was an argument between the NSCDC and the police and the
most senior NSCDC officer, DSC Olufemi, ordered his men who were about 14 in number to disarm, arrest and handcuff the police team leader and three other members of his team,” the statement from the police alleged.

Meanwhile, the Comandant-General of NSCDC, has appealed to men and officers of the Corps to remain calm and avoid any form of reprisal attack.

Addressing men and officers of the Corps in Abuja on Thursday over the incident, Abolurin asked them to continue to collaborate with other security agencies of government in tackling the issue of vandalism and oil theft and protection of life and property of the citizenry.

He urged the personnel to remain resolute and dogged in their drive in fighting the illicit act to a standstill without compromise.

According to Abolurin, the Federal Governmentthrough the enabling Act has mandated the Corps to carry out the function of mounting surveillance, protecting critical infrastructure of government, arrest and prosecute anyone caught in the act of vandalism as well as those suspected to be collaborators. [Nigerian Tribune]