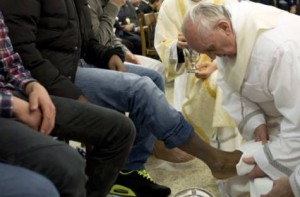 Pope Francis washed the feet of 12 young offenders including two girls and two Muslims at a Rome prison on Thursday in an unprecedented version of an ancient Easter ritual, seen as part of efforts to bring the Catholic Church closer to those in need.

The pope knelt down, washing and kissing the young prisoners’ feet in the first Holy Thursday ceremony of its kind performed by a pontiff in prison, and the first to include women and Muslims.

“Whoever is the most high up must be at the service of others,” Francis said at the mass in the Casal del Marmo youth prison, a fortnight after being elected Latin America’s first pope.

“I do this with all my heart because it is my duty as a priest, as a bishop. I have to be at your service. I love doing it because this is what the Lord has taught me,” the 76-year-old said.

Vatican spokesman Federico Lombardi said many of the participants broke down in tears at the ceremony, which was open only to Vatican media. One young man had to be replaced at the last moment because he was too overcome with emotion.

Video footage from the ceremony showed the pope pouring water over the feet — one of them with tattoos — bending down to kiss them and looking each of the 12 prisoners in the eye before moving on.

Lombardi said that while this was the first time a pope had washed women’s feet, Francis had performed this type of ceremony in his native Argentina many times before becoming pope including in jails, hospitals and old people’s homes.

The Holy Thursday ceremony is usually held in a basilica in the city centre and commemorates the gesture of humility believed to have been performed by Jesus Christ before his death to his 12 disciples at their last meal.

Popes performing the ritual have usually washed the feet of priests.

Catholic traditionalists are likely to be riled by the inclusion of women because all of Jesus’ disciples were male — the same justification used to explain why only men can be Catholic priests.

Francis has already broken with several Vatican traditions with his informal style, although he is yet to begin tackling the many problems assailing the Roman Catholic Church including reform of the scandal-ridden Vatican bureaucracy and bank.

Local prison chaplain Gaetano Greco said he hoped the ritual would be “a positive sign in the lives” of the young offenders at the prison, which has around 50 inmates aged between 14 and 21.

Earlier on Thursday, the pontiff told Catholic priests at a mass in St Peter’s Basilica to stop their “soul-searching” and “introspection”.

“We need to go out… to the outskirts where there is suffering, bloodshed, blindness that longs for sight and prisoners in thrall to many evil masters,” he said. [AFP, Reuters]