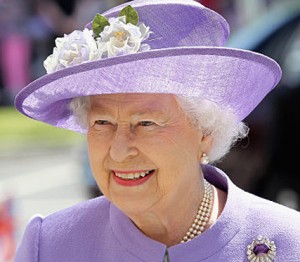 Queen Elizabeth II of Great Britain smiled as she left a London hospital on Monday after she had been admitted for gastroenteritis.

It was the first time in 10 years that the 86-year-old monarch had been admitted to hospital. The last time was in 2003 after which the old monarch has been shrugging off whatever illness beckons. She was even forced to call off a visit to Rome this week, which would have been her first overseas trip since October 2011. She’s been known to rarely miss engagements.

The monarch, wearing a scarlet coat with a brooch and carrying a black handbag on her left arm, shook hands with a uniformed member of staff on the steps of King Edward VII’s Hospital in central London as she left.

The queen left the hospital in a luxury Bentley, accompanied by a protection officer and police motorcycle outriders.

Illustrating her determined spirit, the queen, who first felt unwell on Friday, reportedly presented a long-service medal to a staff member before being driven to hospital on Sunday.

In a widespread support for the Queen on Monday, The Sun on its part said that while hundreds of thousands of Britons take sneaky days off sick with stomach complaints, Queen Elizabeth was “the one person who you can be sure” doesn’t.

“Even at 86, Her Majesty rarely lets up on her still-busy schedule.

“Such is her total devotion to duty that she doesn’t often let a little thing like ill health get in the way of her work.”