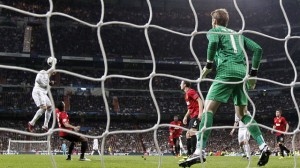 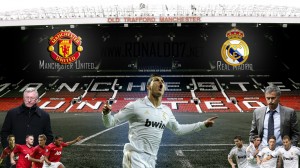 It was a much anticipated UEFA Champions’ league match marred by another poor officiating as adjudged by experts of the game.

Real Madrid was at Old Trafford to build on the success they had over Barcelona in the two ties that both ended in wins for them, but they approached the game with caution as Manchestrr United would not sit back and defend in front of their home fans.

United Manager Sir Alex Ferguson shook things up a bit by naming a totally unexpected squad, and his tactics seemed to be working as United dominated in the first half with more chances, although Madrid had more possession. But the game changer was the 56th minute Nani red card that came after United had taken the lead in the 48th minute by a Sergio Ramos own goal.

It was a big shock to Manchester United who didn’t recover in time to stop Los Blancos from banging in two goals in the 66th and 69th minute. When United woke up however, it was too late, as Madrid goalkeeper had been psyched up for what he had to do, denying United on several occasions. The match ended 1:2 and Real went through on a 2:3 aggregate score.

Ronaldo who received a warm welcome looked pensive as he scored the winner. Even his manager didn’t celebrate the win leaving analysts to conclude United has a special place in both hearts.

The world was shocked by the Turkish referee’s decision to give Nani a red card after his foot went high for a ball he was contesting with Madrid’s Arbeloa, as followers of the game claimed Nani’s eyes was on the ball. But former United Captain Roy Keane had a different opinion; he said the tackle was dangerous. An analyst concluded following Keane’s take on the red card issue; “Now I understand why he didn’t succeed as a coach. He doesn’t have eyes.”

French defender Varane did admit the winger’s dismissal came as a surprise.

“I wasn’t expecting a red card but it is part of the game. I don’t want to judge refereeing decisions,” he remarked.

Mourinho who was disappointed with his side’s performance on the night avoided comments on the red card, but he admitted it helped his team progress into the next round.

“We are happy to have qualified but I expected more,” the 50-year-old said.

“When your keeper is your best player it shows you are not controlling the game as you should.

“We didn’t play well, but football is like this.”

Mourinho told SkySports that after his team’s recent performances against Barcelona – where they won both clashes in the Copa del Rey and La Liga – he was disappointed that they failed to put in a similar showing against United.

“I was waiting for my team to come here and to express our football in a different way.

“I know they [United] are giants, not just physically, but mentally.

“I know they are fantastic, I know they have a manager who can motivate people, but I was waiting for us to come here and play a different way.”

The draw for the quarter-finals will take place in Nyon on Friday, March 15.