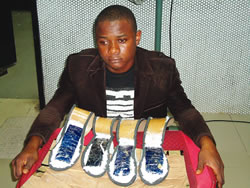 A 26-year-old Nigerian, Igwe Ogbonna was arrested Monday by eagle-eye officials of the National Drug Law Enforcement Agency for being in possession of 630 grammes of cocaine hidden inside two pairs of sandals and his luggage.

Ogbonna was nabbed at the Murtala Mohammed International Airport Lagos while attempting to board a Kenyan Airways flight to India.

According to the NDLEA Airport commander, Mr Hamza Umar, the suspect wore one pair of the sandals while another pair of sandals containing the drug was in his luggage.

Umar said, “The suspect was arrested following the discovery of the drug during a routine search. Officers first found some cocaine inside the pair of sandals Ogbonna wore at the screening area.

Ogbonna in his confession, said that he was travelling to India to further his studies.

“I was directed to Lagos from the East after my travel documents had been prepared and the bag and pairs of sandals handed over to me.

“The people who advised me also instructed me to wear one of the sandals, so I felt bad when the drug was detected.”

Meanwhile, Chairman of the agency, Ahmadu Giade, said that efforts were being intensified to arrest other persons connected to the crime.

He said, “The agency is working to identify other suspects who are involved in this criminal act.

“I also wish to state that members of the public should be careful when people offer to sponsor them abroad. Investigation has since commenced and the suspect will soon be charged to court.”