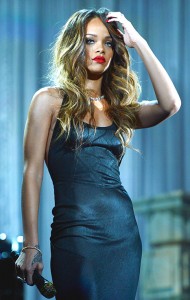 For over four hours, Rihanna kept 2,500 students at Barrington High School in Chicago waiting for her 16-minute appearance for a charity competition they won hosted by Rihanna.

According to The Chicago Tribune, the appearance was slated for 1:00 PM, but the “Diamonds” singer didn’t show up till well after 5:00 PM.

“This Chicago traffic is not working,” Rih tweeted on her way to the event.

Those in attendance also didn’t keep quiet about her tardiness. “It’s one thing to be fashionably late. This is just rude. Our lives don’t revolve around a pop star,” said junior Patricia Halle, who dubbed the afternoon “the survive Rihanna event.”

“Our school worked hard to win this,” Halle continued. “She should be more respectful.”

When Rihanna finally took the stage, she told the students “Thank you guys for coming and waiting” with no explanation for her lateness. Her appearance reportedly lasted 16 minutes.

Not so cool I’d say.