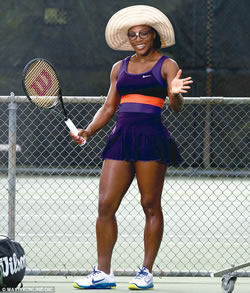 She’s long been known for her love of fashion and pushing the boundaries of court style.

However, we doubt Serena Williams’s latest look of tennis champ-meets-geek chic will catch on.

The World’s Oldest Female No.1 showed she wasn’t afraid to laugh at herself as she dressed in a wacky ensemble in Miami on Monday.

The 31-year-old, who is in Miami for the Open, wore a purple tennis top and skirt with a sunhat and geeky glasses covered in tape as she shot the new Wilson Tennis campaign in Coral Gables.

With the square glasses and floppy hat, it looked like Serena was preparing to make fun of herself as she shot the ad for the racquet brand at the Biltmore Tennis Center.

She tweeted, “Guess who at a #wilsontennis shoot.”

It appears Russian tennis player Victoria Azarenka, who won the Australian Open Women’s Singles this year, was nearby and was overhearing Serena during the shoot.

After she tweeted Serena saying, “All good Serena:)))))’, the latter replied: ‘@vika7 omg do u hear my convo?? Lol I’m soooo embarrassed even more now! Lol hahaha tell me u were laughing!!!! @WilsonTennis #setfun.”

She’s returning to the court after she was forced to pull out of the Dubai Championships last month after hurting her back.

Serena withdrew just minutes before she was due to play Frenchwoman Marion Bartoli after injuring her lower back.

However, she looking forward to Miami, where she’ll be the oldest No.1 WTA since records began in 1975.

She told the Miami Herald last week, “There were times I thought the hill seemed nearly impossible to climb.”