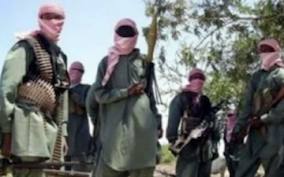 Individuals suspected to be members of the Boko Haram sect on Friday blew up the prison in Gwoza Local Government Area of Borno State, setting free all the prisoners and killing at least one civilian in the process.

So far, an official confirmation of the actual number of casualties could not be ascertained as the Commissioner of Police, Yuguda Abdullahi, could not be reached. Also, attempts to get prison officials in Maiduguri to know the specific number of prisoners that escaped did not yield results.