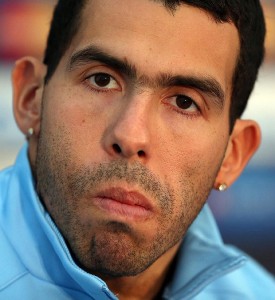 Carlos Tevez has been arrested for allegedly driving while under ban, and is now waiting to hear whether he could face a charge that could bring a possible prison sentence.

Tevez who was banned from driving for six months in January, was taken to Macclesfield police station on Thursday evening after being stopped in a high-powered car on the edge of the town.

“At 5.13pm on Thursday 7 March police arrested a 29-year-old man from Alderley Edge on the A538 in Macclesfield on suspicion of driving while disqualified. He has since been released on police bail,” a statement from Cheshire police said.

Tevez had previously pleaded guilty to two counts of failing to supply information over incidents in which his car was clocked speeding. As well as being banned, he was ordered to pay fines and costings totalling £1,540. His legal team had told Manchester Magistrates’ Court their client did not understand the word ‘constabulary’ on official letters from the police.