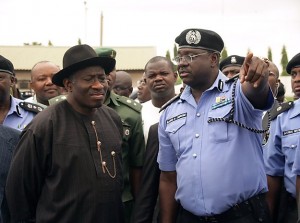 It has been reported that Nigeria’s immediate past Inspector-General of Police (IGP), Mr. Hafiz Ringim, may be seeking asylum in the United Kingdom.

As reported by Daily Sun, shortly after his sack on January 25, 2012, Ringim quietly relocated to the UK and has not stepped foot on Nigerian soil, family sources said. Daily Sun gathered that Ringim’s application for asylum is before the UK Border Agency.

Ringim’s request is reportedly hinged on fears that Islamic militants, Boko Haram, may kill him should he return to Nigeria. Ringim reportedly told the agency that his lucky escape in the June 2011 bombing of the Force Headquarters in Abuja, by Boko Haram, a few days after he threatened in Maiduguri, Borno State, to crush the group, fuelled fears he was a prime target.

The ex-IGP was also said to have drawn the attention of the British officials to the June 6, 2011 murder of his deputy in office, Alhaji Abubakar Ningi. Also killed in the attack were Ningi’s police orderly and driver. Boko Haram claimed responsibility for the killings. Sources said that he informed the British agency that former military chiefs have not been spared by the Islamic militants.