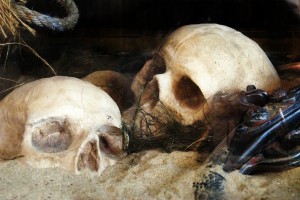 Two dead bodies identified as those of Toheeb Adedokun and Falilu Tajudeen, both three years old, who disappeared from their parents’ house located at 18 Taike Street, Ketu on January 25, 2013 have been found in Ketu.

The bodies were found following report by two staff of the Ketu branch of a micro finance bank, Police sources revealed.

The bodies of the children were in their decomposing state, reports say. However, the circumstances surrounding their death could not be ascertained.

It was learnt that the kids probably strayed or were kidnapped on January 25, as the burial ceremony of their landlord was going on and the area was rowdy.

Both parents have made frantic efforts to locate their lost kids since they disappeared and were still hoping for a miracle when they were invited by the Divisional Police Officer, DPO, in-charge of Ketu division yesterday, where the news was broken to them.

Rasaq Adedokun, a commercial driver and father of one of the children said he was at work when he was informed about his son’s disappearance.

Operatives at the Special Anti-Robbery Squad have reportedly taken over the investigation due to its magnitude and a breakthrough is expected soon on the cause of the death of the children and a possible arrest of whoever was responsible.