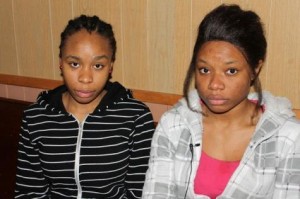 Founder of Nigerians Unite Against Boko Haram (NUABH), Funmi Macaulay, a US-born Nigerian presently living in Brooklyn, NYC recently wrote an article about the plight of Ihuoma and Victoria, two young Nigerians living and studying in Canada who are on the verge of being deported back to Nigeria.

The two girls have been holed up in a church basement the last nine months now, and they need help.

I am surprised that I have not read in any media, local or international, about efforts by the Nigerian government to help two Nigerian students who have been on deportation list in Canada for a ‘crime’ that makes mockery of the very ideals that western societies proud themselves on – hard work.

Victoria Ordu and Ihuoma Amadi, 20 and 21 respectively, having been holed up in the basement of a church in Canada – not for document forgery. No, not for 419, internet scam or fake marriage, but for attempting to work and earn decent stipends to augment what they get from home.

The news media in Canada has been awash with the reports since June 2012 when the two University of Regina students took refuge in a church hoping that the Canadian authorities will forgive them for working in Walmart for two weeks. The issue here is that the student visa they carry permits them to work on campus but not outside. The students have in their various interviews stated that they stopped the Walmart jobs immediately they became aware of the restriction. But the Canada authorities have simply refused to budge.

Maybe the situation has lingered the way it is because of the green colour of the passport they carry. I doubt that the Canadian authorities would have held their grounds the way they’ve done for almost a year now if these two students were Americans, Indians, Chinese or even South Africans. As one born of Nigerian parents in the US, I have the privilege of knowing how it feels traveling with the Nigerian passport and that of the US.

It is instructive that while Walmart that employed the students have gone without any rebuke from the government, these two young ladies have remained imprisoned in a church basement for more than nine months now without knowing what day light looks like. While immigration authorities accepted that Walmart had made an honest mistake in their hiring practices, the same leniency wasn’t granted to the students.

“Walmart was given the benefit of the doubt, while the students weren’t,” said Michelle Stewart, an associate professor in the University of Regina, who’s been campaigning for the release of the two Nigerians. “The most common response to this type of infraction is a fine of $320,” said Stewart. “This is Canada, but it feels like hell for us,” Ihuoma said in an interview with CBS Canada. “We feel forgotten here, nothing is happening at all.”

Friends and well-wishers of these two students have in the last nine months mounted pressure on the Canadian government, but not much has been achieved. I have been involved in the social media campaign to drum support for these innocent young Nigerians, but much as the protests on and off line continues to grow, the Canadian authorities have remained hard-heartened.

Canada holds strong trade relations with Nigeria and is hoping to grow its economic presence in the country as a springboard to reach the rest of Africa. Being Canada’s largest trading partner in sub-Saharan Africa should serve as an incentive in extracting the right government action on diplomatic matters like this. This is the time for Nigeria to flex some diplomatic and economic muscles.

I remember when the reclusive North Korean government arrested two US journalists and sentenced them to 12 years imprisonment with hard labour for illegally entering the country. President Obama sent former president Clinton to the country and in 24 hours those two lady journalists were released to join their families. Nigeria, by virtue of its economic and strategic might, can achieve similar result when efforts are made from the top. Don’t think I’m naive.

I expect President Jonathan’s government to act now. Please save Victoria and Ihuoma from what their lawyer has described as ‘honest mistake’.

Let’s spread this folks! Our voices can be loud enough to be heard, and who knows, maybe we can help these girls out.