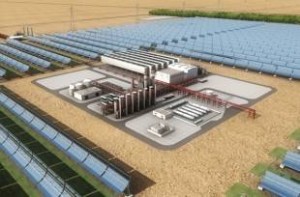 Shams 1 was officially inaugurated on Sunday in the Western Region of Abu Dhabi by President His Highness Shaikh Khalifa Bin Zayed Al Nahyan in the presence of His Highness Shaikh Mohammad Bin Rashid Al Maktoum, Vice- President and Prime Minister of the UAE and Ruler of Dubai and General Shaikh Mohammad Bin Zayed Al Nahyan, Crown Prince of Abu Dhabi and Deputy Supreme Commander of the UAE Armed Forces and chairman of the Abu Dhabi Executive Council.

“The inauguration of Shams 1 is a major milestone in our country’s economic diversification and a step towards long-term energy security,” Shaikh Khalifa was quoted by Emirates News Agency (Wam) as saying.

He also commented on the plant’s future impact.

“Shams 1 is a strategic investment in our country’s economic, social and environmental prosperity,” added Shaikh Khalifa.

“The domestic production of renewable energy extends the life of our country’s valuable hydrocarbon resources and supports the growth of a promising new industry,” he said.

Shaikh Khalifa also expressed his pride in the young Emiratis who worked on this project.

“Expanding our leadership into renewable sources of power demonstrates the United Arab Emirates’ commitment to maintaining its position as a major provider of energy. The expertise they gained, working closely with international companies and building a project of such scale, is the type of human capital development that will enable our country to secure long-term energy leadership,” the President said.

Shams 1, the largest concentrated solar power plant (CSP) in operation in the world, is a breakthrough for renewable energy development and advanced technology, said Sultan Al Jaber, Minister of State and CEO of Masdar, at the opening ceremony.

“Shams 1 with a capacity of 100 megawatt which is now fully operational and connected to the grid will generate clean energy to power 20,000 homes in the UAE,’ said Al Jaber.

“With the demand for energy rising exponentially, the region is undergoing a major transformation in how it generates electricity. In fact, the Middle East is poised for major investments in renewable energy, and Shams 1 proves the economic and environmental advantage of deploying large-scale solar projects,” stressed Al Jaber.

Shams 1, a joint venture between Masdar (60 per cent), Total (20 per cent) and Abengoa Solar (20 percent), was designed and developed by Shams Power Company. [GN]