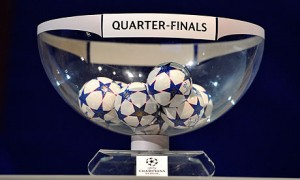 Four-times winners Bayern Munich will face resurgent Juventus in the pick of the Champions League quarter-finals following the draw made in Lyon on Friday.

Bayern, beaten finalists last season when Chelsea lifted the trophy, will first host the Serie A champions who are back in the quarter-finals after a seven-year absence.

“That is certainly not a dream draw for us,” Bayern chief executive Karl-Heinz Rummenigge said of meeting the twice European champions.

“Statistically we have not had good experiences with Juventus. It will be difficult and we will need to have two good days against them to reach the semis.”

Favourites Barcelona will face Paris St Germain with the first leg in France.

“It is not easy but no draw would have been easy anyway. Paris deserves to be part of the big party.”

Nine-times winners Real Madrid will take on Galatasaray in a tie which pits Jose Mourinho, coach of the Spanish side, against his former Chelsea player Didier Drogba. Real are at home first.

Bundesliga champions Borussia Dortmund were drawn against Champions League newcomers Malaga in the other quarter-final with the Spaniards at home in the first leg.

“We can live with this draw,” Dortmund sports director Michael Zorc said. “At least it is better than playing Barcelona, Real or Bayern.”

England do not have a team in the Champions League quarter-finals for the first time since the 1995-96 season. [Reuters]