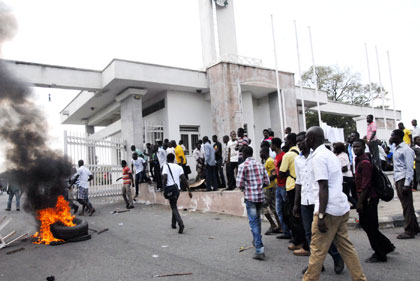 Reprieve has come the way of three hundred and thirty four engineering students of the University of Abuja who have been engaged in a running battle with management over the non-accreditation of their programme as they are to be transferred to six federal universities where they would graduate from.

Three sets of 500 level final year students would spend one year at the Federal University of Technology Minna upon which they would graduate with a certificate from the University of Abuja.

Chairman of the Task Team UniAbuja and Director Quality Assurance of the NUC Professor Chiedu Mafiana announced the decision to transfer the students on Tuesday after a meeting with Vice-chancellors of the universities involved.

Mafiana however said students who do not possess the requisite five credits including Mathematics and English or did not qualify to gain admission from inception would not be transferred.

He said those students had the option of changing their course of study within the University of Abuja.

On anticipated protests from the affected students Mafiana said, “It was the senate of the university that approached us with this request and it pre-supposes they (students) already knew where we are going. If there are persons still spoiling for war it would mean that some of them were not qualified ab initio.”

Meanwhile, the university would resume March 18 for second semester examinations that have been postponed twice owing to protests by the Engineering students.