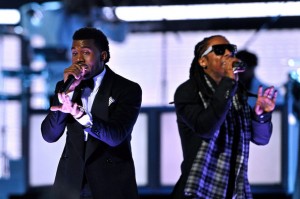 Now I’m starting to believe people who say Kanye is mad Jay Z.
MTV just released their list for the Hottest MCs in the game and when asked who he felt was the best rapper alive, Kanye, who was placed at No. 7 in the list, picked Lil Wayne.

If you didn’t know, Lil Wayne and Jay Z don’t see eye to eye…and being Jay Z’s former bff(wait a minute, is he ‘former’ now?), one would have expected Kanye to pick Hov. Besides, a lot of people say Jay Z is a better rapper than Lil Wayne-you think so too, right?

His London rant was overlooked as one of those things, but now, isn’t it obvious Kanye’s mad at Jay Z?

Kanye explains in an interview with MTV after the list was released;

“Yeah, #7 bothers me. I think that Wayne is the number one rapper in the world.”

“I just think he’s like, you know, him and Jay and Em (Eminem) and certain people are just the greatest rappers of all time. For me I feel that in order for them to put me as #7, they had to bring up things that they didn’t like [about me].”

“Cruel Summer got “Don’t Like (Remix),” “Mercy,” “Cold,” “New God Flow” all on one joint, you know. And “Clique,” and “Clique!” You can’t name five records like that on no album. But they wanna diss me and be like, “He did Cruel Summer and he can’t say he ain’t part of it ’cause he’s on eight records…” Like they wanna try to—ain’t nobody bringin’ up that “Diamonds” remix verse. There wasn’t no verse in a year that’s fuckin’ with that verse.”

Well, who knows maybe he’s just being honest…maybe he’s not mad at Jay Z…he did say he’s a great rapper, maybe not just the best to him.