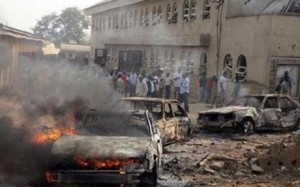 The Christian Association of Nigeria (CAN) has expressed its disappointment over the statement credited to the Sultan of Sokoto and President-General of the Nigerian Supreme Council for Islamic Affairs (NSCIA), Alhaji Muhammad Sa’ad Abubakar, III that the Islamist militant group, Boko Haram, should be granted “total amnesty” for the sake of peace in Nigeria and that “the bottom line of the problem facing us has been injustice meted out to people who are not supposed to.”

According to CAN, in a statement signed by its General Secretary, Rev Musa Asake, “We wonder what the Sultan meant by ‘injustice’ in relation to the activities of the Boko Haram sect when members of the group are a bunch of fundamentalists who have killed, maimed, deformed Christians and made orphans and widows of otherwise peaceful and lovely families, and who have also displaced people, destroyed businesses and livelihoods in their thousands. Would the Sultan sincerely attribute the perpetration of the injustice to Christians?

“If it is injustice, is it not government that should be held accountable? Why would the sect not hold their representatives at the various tiers of government responsible? The Sultan should be told that we have since found out that the attacks are primarily targeted at Christians and their churches… Who then is suffering injustice? Who needs justice; Christians or those killing and bombing Churches?”

CAN also added that the injustice to Christians killed, maimed and rendered helpless by the sect, was underscored by the payment of the sum of N100 million to the late sect leader’s family by the Borno State government without any assistance to any of the Christian victims of Boko Haram. The General Secretary said, “Who is going to compensate the families of the victims of the sect? Where is the justice to these Christian victims?”