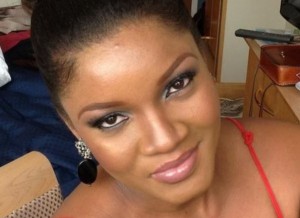 They call her Omosexy, she calls her fans and group of ‘nations’ as ‘Osexynations’. Many refer her as the queen of Nollywood while others call her the ‘trailblazer’.

To those in Nollywood, her appearance in any movie can single-handedly win an award for such film. When it comes to role interpretation, this talented screen goddess never fails to deliver.

Little wonder the name Omotola Jalade Ekeinde has never weaned since joining the make-believe industry over one and half decades ago.

Omotola is presently busy shooting a new movie produced by Tarila Thompson titled ‘Up Creek’. The movie, as we gathered, highlights the Niger-Delta region of Nigeria.

Speaking exclusively on why she chose to be in the movie, the beautiful and sexy mother of four revealed that she decided to act in the film because it is a nice flick.

When asked if she agreed to act in the film because it tells about her region, Ondo State as part of the Niger-Delta region, Omotola said that wasn’t the major reason for taking up the role in the movie.

She had earlier tweeted on twitter, “Day 2! cont of shoot of the movie ‘Up Creek’. If this movie no win Oscar Ehn?…the wahala no get pt 2!”

We learnt that so far, the shoot has been largely successful. Some of the scenes were shot at a jungle in Ikorodu, a suburb of Lagos State. Shoot for the movie started in Bayelsa State in 2012.