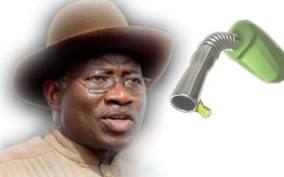 Elders in Yobe on Thursday appealed to President Goodluck Jonathan, to commence exploration of crude oil in the Chad basin. The elders made the appeal in Damaturu at a town hall meeting with Jonathan when he paid a one day working visit to the state.

They said that the exploration would develop agriculture, create employment and improve the economy of the country.

Alhaji Adamu Ciroma, a former Minister of Agriculture, said there were indications of rich oil deposits in the Chad basin area that needed to be explored to enhance revenue base of the country and the people.

“When you find oil in Yobe and Borno, it belongs to the Nigerian nation and it will also promote national unity,” Ciroma said.

In his remarks, Jonathan said N16 billion had been earmarked for the inland sedimentary basin exploration.

He assured that the Minister of Petroleum Resources would update the people on the progress made when she visit the state in June. The president said more jobs would be provided in the next five years while Federal Government would partner with the State Government to rehabilitate victims of the conflicts.

He expressed optimism that “the Nigeria Government can explore the Chad basin in less than two years and develop the Mambilla hydro electric power project for improved energy”. (NAN)