A very old man lost control of his vehicle and hit as many as nine children on a sidewalk outside school. 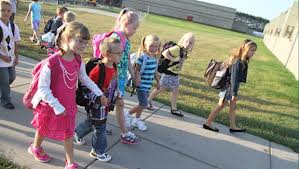 A 100-year-old man backed up his car back onto the sidewalk and hit 11 people, including nine children, from a primary school in South Los Angeles, California, just after classes had ended on Wednesday, authorities said. Four of the children were in critical condition when firefighters arrived, but were stabilized and were in serious condition at a hospital, fire Capt. Jaime Moore said. Everyone was expected to survive, he said.

The powder blue Cadillac backed slowly toward the group of parents and children who were buying snacks from a sidewalk vendor, and the crowd hit his window and yelled at him to stop, but not before some of the children became trapped under the vehicle, witnesses said. Backpacks of children, shoes, sweets and loose change were strewn about the scene behind a grocery store across from Main Street Elementary.

Police identified the driver as Preston Carter and said he was being very cooperative. Carter spoke to television reporters after the accident about five miles southwest of downtown Los Angeles. He said he has a driver’s license. “My brakes failed. It was out of control,” Carter told the local news media.

Asked about hitting the children, Preston said: “You know I’m sorry about that I would not do that for anything in the world. My condolences to them.” Carter was leaving the parking lot of a grocery store, but instead of backing into the street he backed onto the sidewalk and hit everybody, police Capt. George Rodriguez said.

“I think it was a miscalculation on his part. The gentleman is very old,” Rodriguez said. “Obviously he was going to have some impairment in his decision making.”
Rodriguez said the crash was being investigated as an accident, and Carter was not under arrest. He has a valid driver’s license, Rodriguez said.