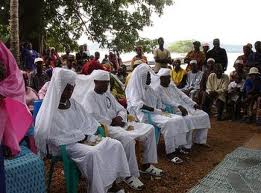 At least twenty prospective couples out of 1,000 widows, widowers and divorcees scheduled for mass wedding in Kano, on Sunday, have been discovered to be HIV positive.

Commander-general of the Kano State Hisbah Board, Sheik Aminu Daurawa, also pointed out that five of them were discovered to be pregnant before marriage, despite the shariah practice in the state which forbids this. These, according to Sheik Daurawa, were discovered during the mandatory medical check-ups.

Previously, two batches of mass wedding had been held in the state, the third batch is scheduled for Sunday.

Sheik Daurawa noted that each of the 44 councils would hold the wedding prayer session for 21 couples, while the session for the remaining 76 couples would be conducted in the state capital. He further disclosed that the board had set aside N10 million to be paid as dowries to the brides, in addition to providing other essential items for the couples.

He also disclosed that a renowned Kano-based businessman, Alhaji Isiyaka Rabi’u and the governor of the Central Bank (CBN), Mallam Lamido Sanusi had donated towards the success of the programme.