There is apprehension in Agbarha-Otor kingdom in Ughelli North Local Government Area of Delta State following a reign of terror unleashed on the people by hoodlums in the last few days. 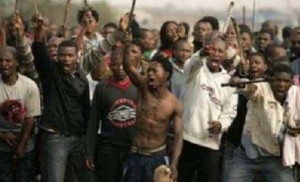 It was gathered that no fewer than 20 women and girls, including an eight-year-old daughter of the Vicar of an Anglican church in the community were raped by the hooligans, who also set ablaze a police patrol vehicle.

A number of police officers were, at the outset, sent to the palace of the monarch of Agbarha-Otor, His Royal Majesty Richard Oghenevwogaga, Ebelle-Okorefe I, to secure the king’s abode following a breakdown of law and order in the community, Wednesday night, but rampaging hoodlums overpowered them.

At press time, last night, the monarch has relocated from the palace for safety reason, while the Area Commander, Ughelli, has reinforced security in the town. Saturday Vanguard also sighted soldiers in the troubled community.

The hooligans, numbering about 100 were angry that the monarch refused to participate in the traditional “Ekene” festival on grounds that he is a Christian.

According to our source, “they wanted the king to make sacrifice to the deity, but he refused, saying he is a Christian and they should go ahead without him contributing money or cooking for them during the feast, as some of the priests and chiefs demanded.

“His refusal to take part in the feast infuriated the hooligans, who vowed to foment trouble and they executed their mission on Wednesday, the last day of the feast. The unfortunate thing is that some chiefs even supported their rebellion,” he added.

Saturday Vanguard learnt that hoodlums allegedly expelled from the community because of their criminal escapades, started with the clergyman because it was in his church that the king held a thanksgiving service recently.

Besides raping the  clergyman’s eight-year-old daughter, hospitalized because of the incident and other girls, they also hijacked the property of people, claiming that the deity wanted them.

A community leader said, the miscreants engaged in raping of women (married and single) since the festival, which is held once every 15 years started on 27th of March. It took a worrisome dimension Wednesday night as they invaded the Church’s vicarage, destroyed and looted properties worth  thousands of naira after making the vicar and his households undergo some inhuman treatments.”

According to our source, “on their way from the vicarage, they invaded the shop of the Queen Mother of Agbarha-Otor and raided her shop; they stole wines and practically every other thing in the shop and also vandalized the freezer.”