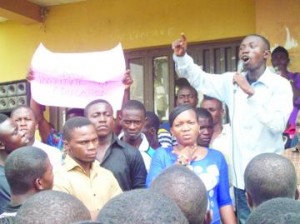 Tai Solarin College of Education, TASCE, Omu-Ijebu in Odogbolu Local Government Area of Ogun State has expelled 26 students from the institution following the rampage and attack on the DPO of Odogbolu Police Division Tuesday.

Public Relations Officer of the college, Mrs. Fisayo Olajide while confirming the development said the decision was taken after a critical scrutiny of those involved in the fracas.

Tension rose in the school Tuesday morning as the protesting students clashed with policemen.

The students allegedly beat up a Divisional Police Officer, DPO, and damaged his vehicle, after they were prevented from disrupting a semester examination planned for Tuesday morning.

Reports say the police returned with reinforcement after the attack on the DPO, and began shooting in the air to disperse the protesters, while also making some arrests.

Trouble began after some student leaders, protesting the dissolution of their Students’ Union Government, SUG, by the school authorities, demanded its reinstatement before a school examination could hold. The SUG was just suspended last week after it had disrupted examinations slated to start last Monday due to the school management’s decision not to allow students who had not paid their school fees write the exams.

The school authorities and the SUG were said to have reached a truce after which the examinations were rescheduled for Tuesday, with the towering presence of policemen to ensure peace.

Before the exercise could commence however, some SUG leaders insisted that the suspended union be reinstated first, which led to the confrontation between them and the police.

Confirming the incident, Ogun State Police spokesperson, Muyiwa Adejobi said peace has returned to the premises, while blaming the crisis on some miscreants who joined some students to disrupt academic activities at the school campus and attacked the Odogbolu Police Division DPO.