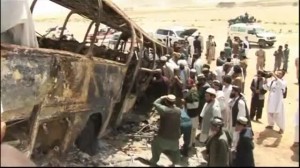 At least 30 people have died in Afghanistan as a passenger bus collided with a fuel tanker in the Maiwand district of Kandahar province.

Many of the victims of the accident which happened just before dawn were travelling to join “neishtar”, the poppy harvest, according to officials.

The Neishtar season lasts just 15 to 20 days each April, when villagers from across southern Afghanistan work in vast poppy fields during one of the most lucrative times of the year for casual labourers.

Neishtar is the small lance used to make incisions on poppy plants to let out the resin, which dries into solid opium residue.

“Tragically, around 4am, a passenger bus collided with a fuel tanker,” Javid Faisal, the Kandahar governor’s spokesman, told AFP. “As a result, we have 30 dead, mostly men, and ten injured.”

He however denied reports that the tanker was set on fire by Taliban insurgents and then left burning in the middle of a road.