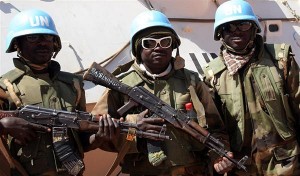 The United Nations has set up an intervention brigade designed to fight armed groups in the restive eastern Democratic Republic of Congo which will be made up of 3,069 troops, a UN official said Saturday.

The brigade will include “3,069 troops. That’s the official number,” said Madnodje Mounoubai, spokesman for the United Nations Organization Stabilization Mission, which will incorporate the brigade.

South Africa, Tanzania and Malawi will contribute troops to the brigade, with each country expected to send an infantry battalion of 850 soldiers, which amounts to 2,550 men, the spokesman said.

The remaining 519 will be spread out in an artillery company, a special forces company and a reconnaissance company, he added.

“The brigade will operate under the command of a Tanzanian general,” he said.

The UN Security Council had on March 28, unanimously approved the creation of a brigade of more than 2,500 troops with a mandate to conduct “targeted offensive operations” against rebels in eastern DR Congo, a mineral-rich area that has been gripped by conflict for more than two decades.

The development came as the first time that UN peacekeepers were given a mandate to conduct offensive operations, which will be on rebel movements and armed tribal militias who are active in the east of the country.